A new month already, February. And what have I done for my research? Nearly nothing. Soon professor L. Verhoeven will be on Curacao. I do not have so much to tell him. Hopefully, I can read a little this week.

Finally a day without firefighting. So Monday I had the time to read a little. Chapter 3 has a lot of interesting things in it. The domains for Early Child Development are described with their predictive validity. The predictive validity of a test is very important when researchers select tests that measure something now with the intention to tell something meaningful in the future. The authors presented the following table with the description of the different Domains. This is their subdivision. In other literature, you will find a different division. 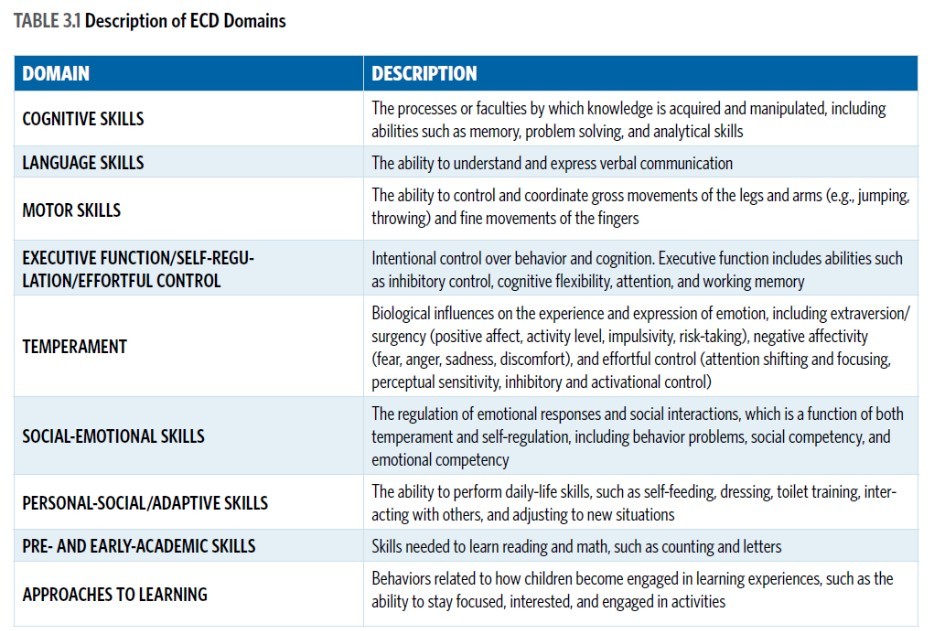 There is a lot of discussion about the way to test the domain about executive function/self-regulation/ effortful control. One of the things to test in this domain is the ability to delay gratification. It is often measured by the “marshmallow test”. 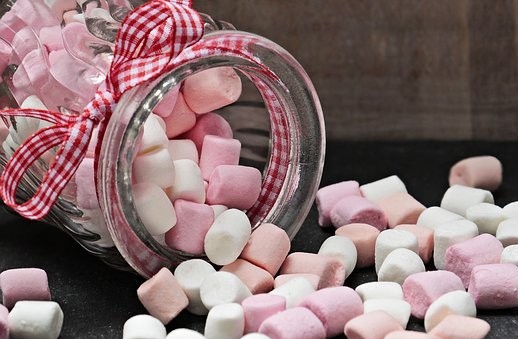 Special thanks to Watermark Community Church (http://www.Watermark.org) for sharing the next video.

There are many variations of this test. It is about an adult giving a child a marshmallow. Then the adult leaves the room, promising the child that if the child waits until the adult returns to the room without eating the marshmallow, the child will receive one or two marshmallows.

The correlation between the duration of time children waited before eating the marshmallow at age 4 and predictions of later social competence, self-control and the ability to cope with frustration and stress was low. However, there was a higher correlation with their SAT-scores 10 to 20 years later.

Although most tests were done with children younger than 3 years have none to little predictive value, with language skills it is a whole different story. The vocabulary of children under three years of age is a good indicator of language development. The success in school, especially for learning to write and read depends heavily on children’s language skills. Children use language to understand and participate in discussions with other students and teachers. It is also necessary to develop an interest in books and stories and to recognize letters and sounds.

A commonly used term describing children’s development at the start of formal schooling and its implications for later academic achievement, is the concept of “school readiness”. It refers to both early academic skills (such as literacy and numeracy) and children’s abilities to regulate their attention and behavior.

This week was a good week although my health didn’t cooperate that much. Besides some time for reading, I got two people to help me out with the 50 students that are in their final year of the teaching training. The process of finalizing the study has to get streamlined too and some forms are outdated. So there is work to do. But now I have more time for my research!! That is super.

On Thursday I had to honor to be part of a very selected group (3 teachers and 5 students) that met with the current Minister of Education of the Netherlands, Mr. Drs. Ingrid van Engelshoven.

Ingrid K. van Engelshoven is a Dutch politician, management consultant, and former civil servant. She is a member of Democrats 66. She was the party chairwoman from 12 May 2007 until 9 March 2013 and has been a D66 alderman of the municipal council of The Hague since 28 May 2010.

Friday night, when my partner and I were unwinding, we passed in front of the Renaissance Hotel and there they were. Mrs. van Engelshoven and Mr. Oleana. I took the opportunity to ask Mr. Oleana for one of the pictures we took Thursday. He promised. I hope he can keep his promise.

This website uses cookies to improve your experience while you navigate through the website. Out of these, the cookies that are categorized as necessary are stored on your browser as they are essential for the working of basic functionalities of the website. We also use third-party cookies that help us analyze and understand how you use this website. These cookies will be stored in your browser only with your consent. You also have the option to opt-out of these cookies. But opting out of some of these cookies may affect your browsing experience.
Necessary Always Enabled

Any cookies that may not be particularly necessary for the website to function and is used specifically to collect user personal data via analytics, ads, other embedded contents are termed as non-necessary cookies. It is mandatory to procure user consent prior to running these cookies on your website.